The clock reads just past midnight, October 30th, and I am about to spend most of my 59th birthday wide awake, from start to finish.  Three hours earlier I had fallen asleep knowing what was coming: heavy rain and wind speeds approaching and exceeding my age.  But I have always slept the sleep of the dead, like a January bear.  Once, as a boy enjoying an outside sleepover with friends, they rolled me down a small grassy hill to try and wake me.  We had plans for the Saturday morning movie at the local theater.  They left without me, no need for a 911 call.  Bob is just sleeping.

This night is different.  It is the eve of All Hallows’ Eve, or the contraction Halloween as we call it, the time in the liturgical year when the dead are remembered, and the time when pagans may have believed that the boundary between our world and the spirit world grew very thin.  I am not sure what spirits are riding the 60mph gust that hit our house just past midnight, but I awake with the certainty that I am about to join them.

I fear the pounding wind will collapse the old single- pane six-over-six windows and blow the flesh-eating glass all over the bed.  I lie awake listening for most of the night.  Happy birthday.

Morning light comes, but no electrical light.  I prepare to milk cows with the generator, and go looking for them in the pasture.  As usual, they seem fine, unflappable, even after a long cold shower with a serious blow dry.  No toppled trees into the pasture that threatened the cows, but I think back several years to the one tree that did.

I am still amazed and embarrassed to think that I may be the only farmer in the entire human history of farming to ever drop a tree on one of his cows.  But I did, and

there were witnesses, otherwise I would have taken that secret to my grave.  I was cutting firewood along the edge of a pasture and periodically keeping track of the cows, especially when I dropped a tree.  At one point, with two gardeners watching from the neighbor’s house, I went to cut a 12-inch diameter ash tree and drop it into the pasture.  The cows were nowhere to be seen.  The brush at the base of the tree was thick, and I removed that while also taking time to remove some old fencing wire near the tree.  Then I cut the notch and made my horizontal felling cut.  I stood and faced the pasture at the same time the tree began its slow, precise fall.  And I couldn’t believe my eyes.  It was as if my favorite and oldest cow had blown in from the spirit world on a 60mph bovine breeze from the other side of the pasture.  I only had time to scream her name as the gardeners watched in disbelief.

She took a direct hit across her back, right above her rear hip bones, and all four legs buckled yet

she caught herself and refused to collapse.  She lunged forward and out from under the tree like only a thousand pound cow could do.  I ran to her feeling as sick and awful and low as I could possibly feel, and not surprisingly, she hobbled away from me with fear in her eyes.  The last thing she had just heard was my voice yelling her name before a tree came thundering across her back.  It’s true that cows aren’t very good at math, but she put one and one together pretty well and kept her distance from me.  Later that night I gave her a handful of cow aspirin for the pain ( yes, cow aspirin; each one the size of a cocktail wiener), and she lived out her life with a bit of a limp to remind me of my historic blunder. 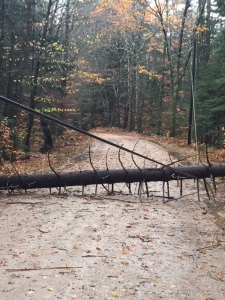 This stormy morning there are no trees on cows, but thousands of trees on power lines across New England.  After milking, I do the generator dance for my birthday.  It involves moving extension cords and the generator to different locations outside the house and cellar every few hours, to keep five refrigerators and four freezers nice and cold.  What could be scarier on Halloween than a hundred quarts of warming yogurt?

Halloween dawns and the yogurt is still cold, courtesy of gasoline and internal combustion.  The grid is still down.  The day passes with chores, planting garlic, the generator dance, and finally kindling a Halloween bonfire for neighbors, friends, and passers-by.  And the flames shed light on kind faces and old souls, some of them sneaking in while the boundary is still thin.  There is no power in the cables overhead, but all the power we really need is gathered around this fire.  Friendship and community mix with  smoke and cider and laughter.  At age 59, I am hoping, like the midnight wind, to gust toward 60. 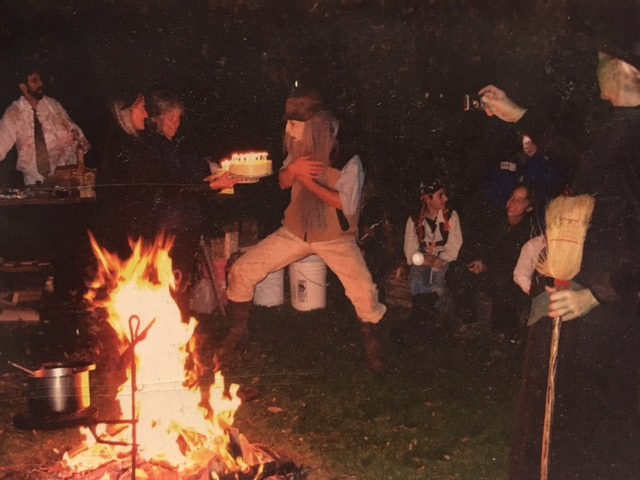